Not sure it's the right shade for you?

Color pigments in the mask revive faded hair color and bring back its vibrancy and shine. Adds vibrant plum violet tone to colored purple, red and brown hair. Plant-based proteins and amino acids strengthen hair, and carefully selected vegan ingredients effectively repair and reconstruct color treated hair. The glow and shine of freshly colored hair are back in an instant!

Improves color uptake and retention while increasing the shine and vitality

Absorbs into the hair shaft to repair and condition, leaving hair shiny, radiant, luxuriant, and healthy.

No ammonia or harsh chemicals, just uniquely created pigments that tone hair without any damage. Comb through and leave in for 5–20 min depending on the desired intensity.

Use instead of a regular conditioner whenever your hair color needs to be refreshed.

Note that your hair’s porosity, condition and current shade affect the result’s evenness.

I love my purple hair!

This is the best way to freshen up my color! Super easy to use and the richest color I've seen from any other color deposting masks. I use every other week and it keeps my hair shiny! Great Purple Mask Conditioner. I’ve only used it once so far and it has brought the color back to my hair that was starting to fade from washing. I colored my hair purple about 4 weeks ago and this mask has brought back the color and vibrancy it was starting to lose. I would definitely recommend. Nice and soft hair after using product. I will order again.

It worked great. It highlighted my already purple , red and black hair. It really colors and it's safe most ingredients are plant base. 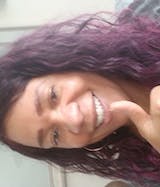 This product works, helps maintain the plum time in my hair. However, it stained my hands, so I have to use gloves when using.

R
Rachel Nicole
More red than I'd expect from "plum" color, but effective

I ordered the plum with the idea of toning down the brassiness of my orange-ish red hair. It turned out to be a good deal more red/less blue than I expected. More like raspberry than plum, to my thinking. It did, however, tone down the brassiness effectively, and I ended up with a very attractive shade of red. I'd been going for something closer to brown, but the result is still very nice.

I love this conditioner! It softens my hair as well as making my color stay much longer between colorings.

Have any questions about Four Reasons?

Color Masks are specially formulated for color-treated hair, as they perfectly
take into account all that colored hair needs: color refresh and deep
conditioning!

Color Masks don't contain harsh chemicals like ammonia. Quite the contrary
actually! They gently cleanse and deeply condition and repair hair, while
depositing color pigments to the hair's surface.

Color Masks are intended to tone hair or maintain your existing hair color. We all know that beautiful hair color can fade and lose its vibrancy within a few washes. That's where Color Masks come in! Use in place of regular shampoo or conditioner whenever your hair color needs to be refreshed. Simple as that!

Yes, the grass is actually greener on this side!
By the end of 2020, 99% of our packaging is recyclable when empty, and 35% of the plastic packaging for our retail products were either recycled or bioplastic. Cardboard boxes used in product shipments are also 85% recycled cardboard, the printed reclaimed paper used to fill the transportation boxes is 100% made of recycled materials and the packaging tape is recycled paper. Our shipments may not be the prettiest but it’s not our style to spoil the environment to please the eye – beauty doesn’t come in one shape and size, and this applies to packaging, too!

The safety of our staff, customers, and community is always top of mind. In light of COVID-19, we have taken steps to prevent the spread of germs inside and outside of our facilities. That includes increased cleaning and disinfecting, work from home when possible, and other measures as recommended by World Health Organization (WHO) and Center for Disease Control (CDC).

US orders ship from Missouri, USA.